Zombies, laser tag and confusion: Here’s what it’s like inside Meta’s virtual world 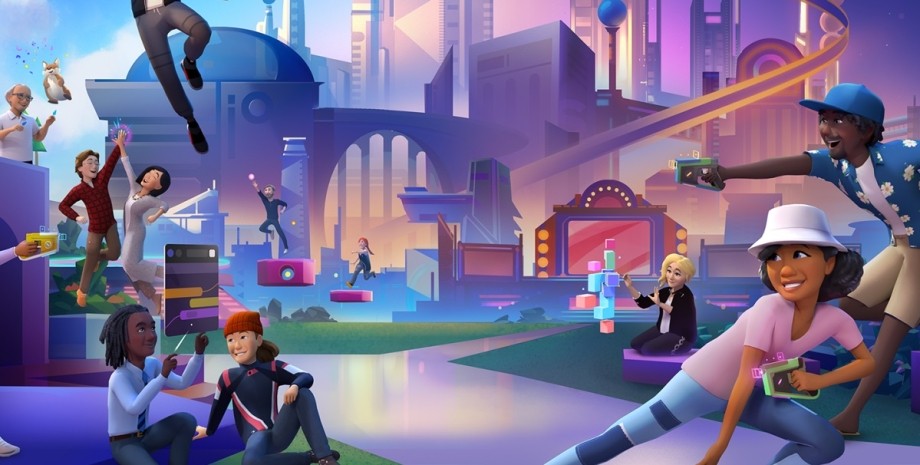 On a chilly December afternoon I played a heart-pounding game of laser tag, flew across town on a magical broom, killed zombies in an abandoned mall, and hung out with an old friend who lives roughly 2,000 miles away — all without leaving my home or, in fact, my living room.

These are the kinds of things you can do in Horizon Worlds, the new social virtual-reality app from Meta, the company formerly known as Facebook. The app, which was released in the United States and Canada earlier this month, includes a slew of VR «worlds» that you can visit and encourages users to build their own worlds for anyone to explore.
Horizon Worlds is Meta’s most ambitious effort yet to get people to hang out together in VR, after spending billions on this technology and recently making it an even bigger focus focus as the company touts its «metaverse» ambitions. The launch comes at a promising moment: VR is more affordable, accessible and capable than ever before. But challenges remain.

While the app is free, the headset required to use it costs $299 or $399. Despite years of hype, VR continues to be a niche technology, with uncertain use cases beyond gaming and entertainment. And Meta is betting heavily that it can convince people to buy into its vision for a virtual world after a bruising period of headlines about the company’s impact on the real world.
After spending days in Horizon Worlds, it’s clear the universe Meta envisions already has some polished pieces, but it’s still very rough around the edges — and it’s certainly not the sort of full-fledged, sprawling virtual world conjured up when Meta executives talk about the so-called «metaverse.»
In Horizon Worlds, users inhabit customizable (but legless) floating avatars — mine looks kind of like a cartoon version of me on a good hair day — that some might find creepy or obnoxious. Facial expressions also don’t necessarily match what the person behind the avatar is feeling. For example, I noticed it’s easy to make the avatar look chipper but nearly impossible to make it look sad.

The hand controls can feel choppy and glitchy — particularly if your virtual self is near any VR objects that can be picked up. It can also be hard to find fun things to do in Horizon Worlds and, frankly, the worlds that already exist often sound cooler than they are.

And as more people populate VR, there will undoubtedly be concerns about recreating some of the problems we already have on the internet in virtual places. One Horizon Worlds beta tester reportedly posted in the app’s official Facebook group in early December that a stranger groped her within the app. When asked about this incident, a Meta executive told tech site The Verge that the person hadn’t used the app’s various safety features, such as the ability to block another user.
In my experiences, harassment was not a problem, but it has long been an issue in VR in general, and it’s not that easy to block or report other users (particularly if you aren’t skilled at using the Quest controllers). A different issue was more immediately obvious. There appeared to be several underage users — the app is available to anyone 18 and older — including one I overheard telling another user on a Saturday night: «My mom is telling me I have to go to bed.»
There’s a lot at stake here for Meta, and arguably for anyone who chooses to use VR. The VR market is still small, with tech market researcher IDC expecting 8 million VR headsets to ship this year and 14 million next year. But the market continues to grow, and Meta is a frontrunner. The success (or failure) of Horizon Worlds will likely color the experiences users have in different VR apps for years to come.
At the plaza
The first thing you see when you open Horizon Worlds is a menu including three activity choices: Do you want to play games, hang out, or attend an event? Unfortunately, when I was trying the app out in late December, there weren’t many events going on within the app. Instead, I spent some of my time hanging out in the Plaza — a general gathering space within Horizon Worlds — and exploring different worlds, both by myself and with a real-life friend who joined me in VR.
The Plaza is smartly designed, particularly if you’re new to VR. Your avatar materializes on a platform from which you can see the avatars of other people who might be there at the time. There are some simple activity options, such as flinging paper airplanes and boomerangs at targets, to help you get a sense for how the controllers work. It’s also a good place to find a live person (Meta calls them «community guides,» and their avatars have a clear label above their heads) who can assist you if you have questions or need help.
Tag, you’re it
The Plaza is a pleasant place to get your bearings — late this year, it was decked out with holiday decor ranging from a cheery snowman to incessant Jingle-Bells-tinged music. But after about 15 minutes or so, I was ready to move on.
Where to go? A tap on one of my handheld controllers pulled up the menu that includes everything from a virtual camera to tools for reporting users who are behaving inappropriately to the ability to navigate to different worlds. This menu also includes suggestions for worlds within Horizon Worlds, some built by Meta, some by users.

One world that Meta built and has been promoting is Arena Clash, which is a multiplayer laser tag game. I popped in there by myself and was relieved that a fellow user with a star-shaped nose stud and black wire-rimmed glasses immediately welcomed me and asked me to join their team. (Even though I’ve used VR headsets for years, I’m still shy about approaching strangers in virtual places.) We played several rounds of three-on-three laser tag that got so raucous my husband walked into the room, in real life, to ask me to stop yelling. I apologized but, hey, I was working.
For now, at least, Arena Clash shows Horizon Worlds at its best: it’s visually well thought out, easy to navigate and, most importantly, fun. It’s the kind of virtual place you can imagine visiting over and over, and, in fact, I did over the course of a week.
Now what?
While it was easy to find (and enjoy) Arena Clash, I had a trickier time discovering other compelling worlds. Horizon Worlds offers some suggestions — a combination of worlds it promotes and ones targeted to users based on factors such as worlds you’ve «liked» — but it hasn’t done a great job of highlighting good ones. It’s also hard to search when you don’t know what exactly you’re looking for.

A world called Retro Zombies sounded promising. You get to shoot zombies in what appears to be a vacant mall. But the graphics (including the zombies) were rudimentary and after a few minutes of shooting, it just wasn’t that exciting.
Eventually, I realized that any worlds users have published are visible in their profiles (and you can see the details of who made a world before visiting it). I found the user name for Horizon Worlds itself (Horizon_Worlds) and checked its list. This showed me several new, interesting worlds, including Horizon’s Haunted House of Horrors, complete with ghosts popping out from walls, creepy animated paintings hanging on the walls and an assemble-your-own Frankenstein lab.
I can’t see you
Beyond the struggle to find something fun to do, I also had a hard time finding my real-life friend in Horizon Worlds.
One afternoon, I headed to the Plaza to meet up with my buddy and senior staff writer at The Wirecutter, Signe Brewster. In real life, she lives across the country from me, so we’ve caught up in VR a handful of times. I arrived, via my avatar, and looked around. I couldn’t find her anywhere. Signe had a similarly disconcerting experience somewhere else in digital space.
We soon realized that while we were both in the Plaza, we weren’t in the same version of the Plaza. Horizon Worlds limits capacity to 20 people per world before automatically placing users in another replica of that world; perhaps there were simply too many people in the Plaza one of us had entered.
Eventually, I spotted a portal in the Plaza to a snowy-looking world called Santa’s Cave, and I headed there to meet Signe. She arrived right after I encountered a user who told me their mom said it was okay for them to use the app. We traveled the world’s icy ramps, chatting about real-life stuff like how quickly our kids are growing and what holiday gifts are best for toddlers. We used virtual pickaxes to hit chunks of something that might have been ice or rocks. We had a great time catching up, but we never found Santa.
Eventually, we gave up and headed to Arena Clash for a game of laser tag. It was a fun time, but to keep me coming back, Horizon Worlds needs more worlds like this — and Meta will have to convince a lot more of my friends to strap on headsets.