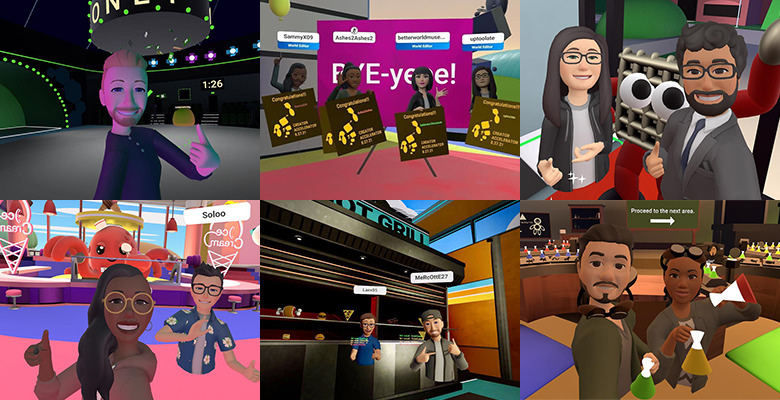 Though Meta is steadily building up three social VR apps—Horizon Worlds, Horizon Venues, and Horizon Workrooms—the trio still exist as separate apps and hardly constitute a seamless experience. In the future the company hopes to change that and open the door to non-VR devices. But how long will it take?

Meta is undoubtedly bullish about taking a leading position in the metaverse, but it still has a very long way to go before anything that it’s working on could even really be considered part of the metaverse.

Today the company runs three separate social VR apps under the Horizon name. There’s Worlds, a place where people can build experiences for others to enjoy; Venues, where people can watch concerts, sports, and more together; and Workrooms where people can collaborate with traditional meeting tools.

Although all three share a common umbrella name, and even share the same avatars, they’re really entirely different applications. You might be sitting right next to your colleague in Workrooms and invite them to watch a show with you in Venues after the meeting, but there’s no seamless way for both of you to actually go from A to B without quitting your current app, launching a new one, and then eventually find each other on the other side. Not to mention dealing with an entirely different interface and features between the two.

In an interview with Digiday, Meta’s VP of Horizon, Vivek Sharma, hinted that the company hopes to eventually bring these experiences together in a more seamless way.

“Eventually, Sharma plans to stitch [the three Horizon applications] together to create a cohesive virtual world,” writes Alexander Lee. “Though he didn’t offer specifics about the timeline for this union or what the overarching platform would be called.”

To some extent, the company hopes to fix, or at least temper, this issue by opening Horizon apps to non-VR devices, Sharma told Digiday. Exactly when this might happen, or which devices it would target is unclear at present.

High accessibility is important for any social applications to find traction, something that Meta ought to know better than anyone else. And yet when Meta does finally get around to making its Horizon apps more accessible, it will only be playing catch-up.

Leading social VR applications like Rec Room and VRChat have long since supported VR and PC, with Rec Room even being available on game consoles and smartphones. Not to mention that both of the aforementioned apps are available on a much wider range of VR headsets than any of Meta’s Horizon offerings.

For all of Meta’s resources and significant spending in this space, the gears have been turning slowly. The company will need to start moving quickly if it doesn’t want to risk losing out to more agile players, especially considering that its MO of buying access to disruptive markets might not be as viable as it once was now that the FTC is increasingly scrutinizing its acquisitions.