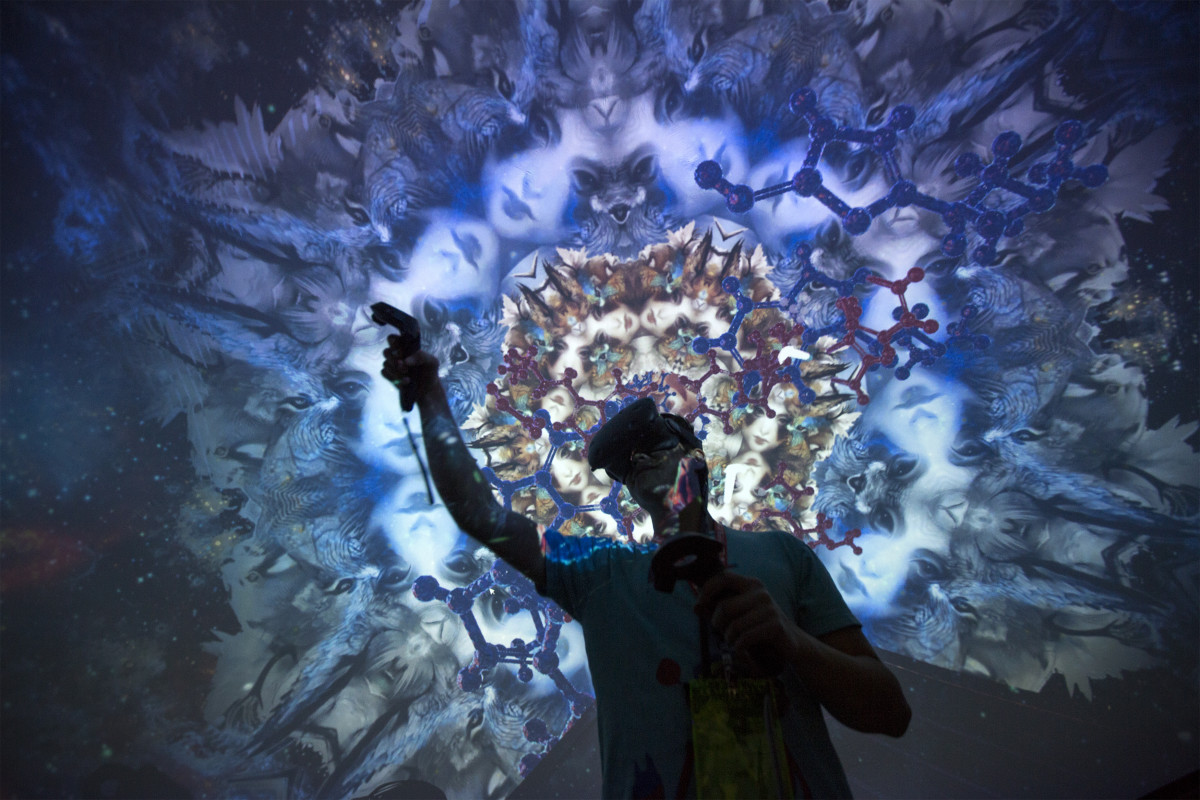 A Forbes piece about the metaverse, posted on LinkedIn, went viral with over 100,000 views and thousands of comments and reactions. The article tapped a nerve. It brought out an overwhelming visceral reaction to many people who expressed their dismay with social media sites—lumping virtual reality into this medium.

The reactions, from the predominantly white-collar professionals that consider LinkedIn their go-to social media platform to network or find a new job, provided honest, raw insights into their mindset about this emerging technology.

The piece shared the possibilities of virtual and augmented reality. For example, instead of Zoom calls, you can interact with co-workers and clients in a virtual environment that feels real. You’d have the ability to purchase homes, play video games, interact with family and friends, attend concerts, shop, try on clothes at a store and buy items.

Mark Zuckerberg, CEO of Facebook, now known as Meta, is one of the leaders of this mission to make the metaverse available and accessible to everyone. Zuckerberg told his employees that he believes that this will be a big part of the future of Facebook. “It’s a virtual environment where you can be present with people in digital spaces,” he explained. The chief executive predicted “You can kind of think about this as an embodied internet that you’re inside of rather than just looking at. We believe that this is going to be the successor to the mobile internet.”

Zuckerberg says that the metaverse will offer new, exciting opportunities to people. It could be an enhanced work-from-home experience that makes you feel part of the team, and not isolated alone in your apartment. You may interact with co-workers, go on interviews, communicate with clients and build businesses. It feels that if this works, there’s an unlimited possibility of what can happen in a new virtual reality.

With his war chest of money, many assume that Zuckerberg and Meta will rule the new metaverse, which is not true. There are many companies and entrepreneurs staking their claims on the metaverse. A large percentage of the comments from members on LinkedIn had a visceral response to the post, appalled that the Meta CEO would wield even more control over their lives.

The vast majority of responses were highly critical of Zuckerberg and the metaverse. Many said that they want nothing to do with another platform run by the Facebook founder. People on the site vented their outrage over the ill effects of social media in general and its overall negative impact on their lives and mental health. There were also a fair number of people who were curious about virtual and augmented reality, and some highly excited about the innovation.

The responses are not too surprising. With every new innovation there are people who welcome it with open arms and those who remain cynical, and question why this new piece of technology is necessary. Some people are concerned that they won’t be able to navigate the new technologies and will be left behind.

The internet, smartphones, electric vehicles, shopping online, using apps to get a car to drive you around, having strangers pick food for you at a grocery store, and dinner delivered to your doorstep, all seemed strange at the beginning.

While all new businesses have growing pains, after a while, people start to recognize the value offered and then adopt the new services. The metaverse is no different. As you’ll see in the comments below, there are early, eager adopters, and those who believe it’s doomed to fail.

Reading through hundreds of comments, there were several prominent themes:

Here is a sampling of the responses:

“If this does become reality, it will be the worst step the human race has ever taken and a backward step in evolution. How anyone can be excited by this is beyond me. I am sure that all this new technology could reap great benefits for all; however, it is being squandered and misused by the few—promising untold riches and an ‘all your dreams come true’ alternative life to the many, which will sadly and inevitably be worse for most.”

“Comments that are being posted where they would not work for a company that required them to use VR or Augmented VR (which is more the likely) reminds me of how people acted when computers first came on the scene.

Also, the idea of being tethered to a computer is the opposite of what this would do. I think many do not understand augmented reality where reality replaces the computer screen and is the background for your computing. Every comment that disposes this concept because of lack of real human interaction is actually supporting the lack of real human interaction by staying tethered to their existing computer.

Too many are also looking at this by the movies they have seen. If we let the movies dictate our future, we are indeed looking at a bleak future.

Today, I have to connect with you through text or a video call. Tomorrow, you will be able to take a walk on the beach with me as we discuss animation in IClone or Maya and how it relates to Omniverse.

You will be at home, but your hologram will be there with me and mine with you. We will be able to read each other’s face and body language, a critical tool in education that is limited with distance education and zoom meetings.

We are bringing our reality into our tech. It is at this moment that we are communicating without it.”

“Why do we need to be tethered to either our computer or a virtual reality mask? Why can’t we just…live in the real world? Like, in person. The way we did 2 years ago?”

“I say tread lightly with these new technologies. Look how dysfunctional society has become since the advent of mobile phones. People are at the same time more connected (albeit very superficially) with their 1000 Fakebook friends and but probably can’t name a single ‘friend’ that would pick them up from the airport or help them move. I believe that people will embrace this metaverse because society wants to escape from reality so these things are a natural course so beware of the potential consequences.”

“What effect does the Metaverse have on people who have mental disabilities and/or emotional issues? Have any studies been conducted to find correlation between a person’s Emotional Intelligence (EQ) and navigating the Metaverse?

I’ve read research being done using VR to help veterans who have PTSD. From the limited amount I’ve researched, I’m not impressed. But, for the sake of this discussion, that isn’t important. What’s important is that the subjects were apparently successfully entering the AR/VR world, in spite of their anxiety, hyper-vigilance and other emotional issues.

The bottom line is, have any dangers been identified that would limit who should use the Metaverse?”

“Dislike. I’m not taking another job without visiting an office in person. Meet the team. Feel the atmosphere of the space and employees.”

“I think this is a major mistake. Come back to the real world. Go and shake somebody’s hand. Say Hello to someone you [have] never met. Maybe try smiling before you go and try and live in some fake world.

Get off the couch and go for a walk, hike or go have coffee with someone.

Everyone says [they’re] too busy. Not sure what everyone is so busy doing. Will be interesting to see what happens to people who dive deep into this.

I personally believe mental health and physical health will only be getting worse for people diving in.

The choice is yours. For me, I will probably delete Facebook before I start using those platforms.”

“Agreed, but the zuckerverse will try their very best to shove this down our throats, along with corporate America and the federal government. We must hold the line against this nonsense; otherwise, technology will be the ‘land’ and we may easily be shunned or banned for ‘insubordination of the zuckerverse.’”

“This is a bad idea for what it means to be human. Less movement with our bodies and more living in our heads. Less contact and awareness of what is going on in the real world and with the Earth. Let alone the possible impact of this device attached to our heads. Just not a good idea when you look at the big picture.”

“There is a great potential of this tech in #healthcare…in a not so distant future. Imagine patient wearing some next generation full body haptic suit meeting their PCP in #meta right from their home. Patients are already seeing their PCPs via telemedicine, but this is just taking it to a next level. Just need #hipaacompliant #meta.”

“This will be the new adaptation for solutions that will attempt to gather more data on a particular subject. An object, a person, a place, almost anything will be eventually transformed into digital, so it can be viewed with many data points.

Goldmine? Yes, the companies that design games are way ahead of others seeking to invest in a “world.” There will be many advancements, especially in seeking employment, visualizing an area, looking at production quality and advancements and entertainment will be hand and stride.

The digital age is taking one more short step in its young, but dominating lifetime. There will be many more.”

“But aren’t we talking now— in writing—virtually? But we’re communicating. It could be more productive if the point that was made about finding purposeful human-centered contact will always be the goal. Refusing to deal with technology won’t stop it. It will only prevent us from being prepared.”

“Due to its digital existence, actions in a metaverse will translate into personal, biometric, financial, and even emotional data. This of course raises concerns about its security, confidentiality, and intellectual property as well. The metaverse will increase the need for data security and cybersecurity as the number of places that can be attacked will expand exponentially. Although the underlying systems will remain the targets for stealing data, this could change as the platforms become more popular.

Additionally, when avatars are used as a form of identification, the person and personal data become susceptible to being copied, stolen, erased or manipulated. Although biometric identification could be a solution, spoofing is another risk.”

“I don’t care how complex your internal system is. And if in the future, you run out of employees because of the increasing complexity, that is your problem. But large companies dealing with customers make the untested assumption that everybody can follow their increasingly complex interaction with all segments of the population, while disconnecting every other form of more easily accessible communication. Sure, it saves money for these self-serving companies, but not every 80 or even 60-year-old person without much computer experience can keep up with even paying their utility bills, etc.”