In 2021, tech talked up ‘the metaverse.’ One problem: It doesn’t exist 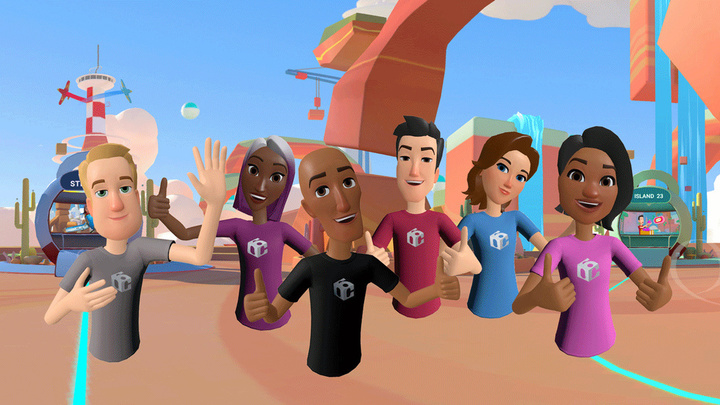 One slight hitch: The metaverse doesn’t exist yet, and it probably won’t anytime soon.

What does exist is an idea, an explosion of hype, and a bevy of rival apps and platforms looking to capitalize on both — without a clear path between the idea and reality. In techland, 2021 wasn’t the year of the metaverse. It was the year of rebranding existing technologies as building blocks for the metaverse, while leaving intact the corporate walls that make a true metaverse impossible.

On Oct. 28, Mark Zuckerberg announced that Facebook was changing its name to Meta to reflect its new focus on building the metaverse: a vast, immersive online realm that would encompass entire digital societies and economies. Facebook — that is, Meta — envisions its Oculus virtual reality headsets as a portal to that realm, the way our smartphones are a portal to today’s mobile Internet.

In the two months since Facebook’s announcement, the term “metaverse” has taken off. A search of the Factiva database finds that it has appeared in more than 12,000 English-language news articles in the past two months, after appearing in fewer than 4,000 in the first nine months of 2021 — and fewer than 400 in any prior year. (Not surprisingly, Facebook was by far the most commonly mentioned company in those articles, with nearly 10 times as many appearances as the next most-mentioned firm, Microsoft.) Google Trends, meanwhile, shows that searches for the word have spiked roughly twentyfold since mid-October.

Many of those stories treat the metaverse as if it were a fait accompli — a real thing, like the World Wide Web or social media. After all, the metaverse has to exist in order to get married there, right?

While definitions of the metaverse vary, most proponents agree it involves more than just putting on virtual reality goggles or augmented reality glasses and interacting with avatars. It implies a bridging of countless smaller digital worlds and experiences through technical standards that allow users to move between them, carrying their virtual identity, social connections and possessions as they go. The word itself — coined by author Neal Stephenson in the 1992 science-fiction novel “Snow Crash” — implies that it’s not just one app, device or experience, but an overarching system of apps, devices and experiences. (“Meta” means “beyond” or “after” in Greek, while the English prefix “meta-” connotes transcendence.)

A widely cited definition by the venture capitalist Matthew Ball starts with the premise that it is a “massively scaled and interoperable network of real-time rendered 3-D virtual worlds” that persists through time and across platforms and devices.

Zuckerberg, for his part, has described the metaverse as “an embodied Internet where you’re in the experience, not just looking at it.” And in his initial announcement, he was careful to acknowledge that “the metaverse will not be created by one company.”

Indeed, interoperability — the working-together of many virtual worlds — is key to the concept. It’s also what’s missing from almost everything that’s suddenly being called “the metaverse.”

The couple that got married “in the metaverse” actually held their virtual nuptial via the remote collaboration platform Virbela, which required guests to download the company’s proprietary software and create a specific avatar, the New York Times reported. While Virbela’s homepage claims that “the enterprise metaverse is here,” the company said its online worlds are not interoperable yet with other platforms. (It’s also worth noting that the digital marriage wasn’t a legal marriage; the couple officially tied the knot the old-fashioned way, in person.)

The Meta executive who granted an interview “in the metaverse,” meanwhile, held the interview on Meta’s own social VR platform, called Horizon Worlds, which it released on Dec. 9. With an array of 3-D gathering spaces, experiences and minigames, Horizon Worlds exemplifies Meta’s vision for what the metaverse might look like. But you can only reach it via Meta’s own Quest headsets, which start at $300, and your log-in is tied to your Facebook identity.

That isn’t a metaverse. It’s just another walled garden, the venerable tech term that denotes a self-contained online environment that’s closed off from the wider digital world. Horizon Worlds is to the metaverse as AOL was to the Web — except that there really was a Web beyond AOL, whereas at this point, there’s no metaverse beyond Horizon Worlds.

While Meta has seemed to embrace the “metaverse” framing — it was Meta’s Nick Clegg who suggested to the Financial Times reporter that they meet “in the metaverse” — a spokesperson acknowledged to The Washington Post that Horizon Worlds is just a starting point.

“We see Horizon Worlds as one of many foundational steps to make the metaverse a reality over the next 5 to 10 years,” Meta’s Eliza Kern said in an email. “But just like the Internet, the metaverse won’t be built by a single company, and Horizon Worlds is an example of how people will build the next generation of social spaces together.”

For now, the best microcosm of what a metaverse might look like is Roblox, an online platform wildly popular with children that encourages users to program their own games and experiences within it. Players then hop between each other’s experiences, maintaining the same identity and inviting their friends along if they like. The sub-apps share a virtual currency, called Robux, with the company taking a cut of every transaction. While Roblox can be played on virtual reality devices, it’s most popular as a simple app on users’ phones and PCs.

A real metaverse would link Roblox, Horizon Worlds, Virbela and all the other virtual worlds, with protocols for transferring one’s information and currency between them. Perhaps you’d stop by a virtual currency exchange to convert some Robux to V-Bux when you moved from Roblox to Fortnite, another game with metaverse-like elements, which is owned by Epic Games.

Epic CEO Tim Sweeney, by the way, is a leading metaverse proponent: He outlined his vision for it in the Epic Games v. Apple antitrust trial, presenting it as a tech future beyond the control of the smartphone giants. Microsoft CEO Satya Nadella is also staking a chunk of his firm’s future on what he calls the “enterprise metaverse,” a system of virtual worlds built for work.

But getting rival companies to meld their products into a single metaverse would require a level of cooperation and openness for which today’s tech gatekeepers have shown little appetite or aptitude. Historically, the development of interoperable technologies such as email and the Web has been driven by the government, academia and nonprofits — not corporate giants such as Meta.

Epic Games believes the Internet is broken. This is their blueprint to fix it.

There is a vocal and moneyed contingent that sees a solution in the blockchain — decentralized ledgers that can track activities without corporate or government oversight. The virtual world that has sparked the most real estate speculation — called Decentraland — runs on the Ethereum blockchain. The idea is to build a metaverse that exists independently of today’s tech giants, breaking the grip they’ve established on today’s mobile Internet with protocols that theoretically allow anyone to build apps and experiences that are accessible to all.

One obstacle is that blockchain transactions can be slow, insecure or environmentally wasteful, depending on the protocol, making them potentially an awkward fit for a technology that would require intensive, real-time processing on an unprecedented scale.

Ball, even as he defined the metaverse, noted that it’s bound to be a moving target.

“We should not expect a single, all-illuminating definition of the ‘Metaverse,’ ” he wrote in June. “Especially not at a time in which the Metaverse has only just begun to emerge.”

But neither should we apply the term indiscriminately.

With all the hype around the idea of the metaverse, it’s clear that Meta, Microsoft, Roblox, Epic Games and many others have an incentive to invest heavily in marketing their products as part of the metaverse. Defining the term down to the point that it already exists plays into the hands of those that already hold the most power. But calling today’s walled-off apps “the metaverse” lets them off the hook for the hardest part: building a metaverse in which anyone can participate.