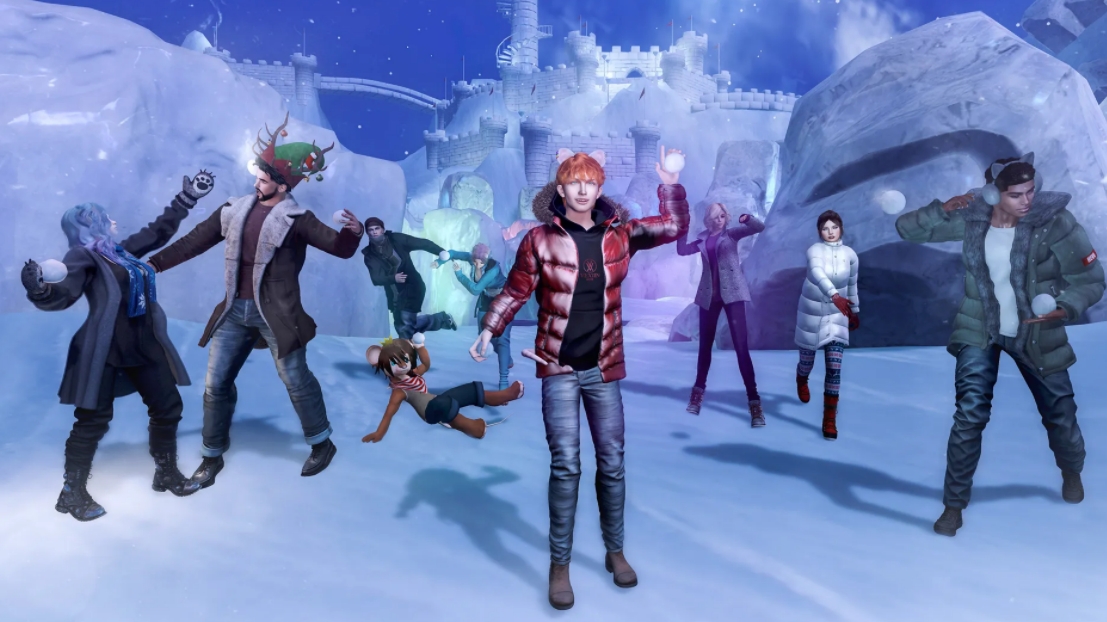 The bride wore a flower crown with a gray, buttoned skirt fit for a midtown office. The groom resembled Jeff Bezos. At the reception, there were guests and a stage and a photo slideshow. Everything was familiar, except the venue. Where were they? Turns out, the bride’s corporate attire wasn’t too out of place. Instead of a church or hall, their wedding took place in the “metaverse,” specifically an unknown, low-fi virtual world called Virbela, an outgrowth of realty company eXp World Holdings, which employs both halves of the couple.

Let’s be clear about one thing: There is no metaverse. At least not yet. No one really agrees on what a metaverse is, but averaging together the more credible definitions yields a persistent, social cyberspace that intersects with the IRL economy and integrates with other online platforms. Right now, nothing is doing this at any notable scale. Instead, we have a couple of well-attended virtual worlds like Second Life, a handful of popular massively multiplayer online role-playing games like World of Warcraft, and a lot of tech companies salivating over a new way to brand their sprawl of digital products and services. And, of course, there’s also Virbela and its kin of strange, underpopulated thingies snatched right out of a 2005 iteration of Internet Explorer.

There is definitional gristle, of course. Tech companies have discovered the benefits of characterizing a metaverse as a continuation of their own products or services. Meta, for example, has decided that virtual reality integration is important to a metaverse; and conveniently, its Horizon Worlds runs on the company’s Oculus Quest headset. Then there are the blockchain companies preaching the essentiality of their own coins to their own cyberspaces. Now, after almost a year of hype, it has become marginally easier to separate meat from metaverse fat. What we’re dealing with here is cyberspace—connected, incarnated, and economized. There’s still just one problem. Everything actually desirable about this metaverse resembles a pared-down version of the online games millions have been playing for decades.

It’s been 20 years since wedding bells first rang in Second Life. Game developer Square Enix included mechanics for sending out invitations, composing vows, and exchanging rings in 2002’s Final Fantasy XI. Outside of nuptials, online games already provide the most compelling functions associated with the “metaverse”—often, with greater graphic fidelity, more complex social systems, and at a significantly larger scale. As professional cyberspace architects and governors, it is game developers who have iterated on and mastered the two to three actually promising attributes of a metaverse, mostly revolving around socializing in virtual worlds.

Since 1996, players’ furry avatars have stood around cybering in MMORPG Furcadia’s 32-bit meadows. Yet here we are, more than two decades later, hearing tech executives preach about things digital catgirls were doing back then. It would be cute if it weren’t so unsettling to see those executives doing it with that same bravado. Mark Zuckerberg’s delirious pitch to build the future of work in Meta’s metaverse evokes early tech journalists’ breathless forecasting about how, in some brave new world to come, corporate culture would migrate onto Second Life. There we would be, they promised, floating our winged Sonic the Hedgehog avatars to each other’s cubicles to talk about the Dow Jones. School, too, would be uploaded, technologists believed. “Aaron Delwiche, an assistant professor at Trinity University in San Antonio,” reads one 2004 WIRED article, “often gathers students in his Games for the Web class in an unlikely classroom: the metaverse known as Second Life.”

“Yes, it is amazing how quickly we forget about things that are not at the top of the news feed,” says Philip Rosedale, cofounder of Second Life creator Linden Lab. At the height of Second Life fever in 2006, he says, more than 500 articles were written about it per day. Today’s metaverse excitement isn’t quite as grand, but those working on the new crop of platforms could benefit from revisiting the hype of yore. “People designing these systems today (in particular the more complex things like governance and moderation) would do well simply to go back and read through some of the thousands of articles about virtual real estate, weddings, legal disputes, banking, music concerts, big brand invasions, and the like,” Rosedale says.

What are Decentraland or Horizon Worlds giving us that Second Life did not? More barriers to entry, it seems. To access Horizon Worlds, users must purchase a $300 Oculus headset from Meta. In Decentraland, users need crypto wallets for the game’s proprietary ERC20 token, and in its most popular “experience,” avatars mill about in a low-poly field next to a “Coin Cart” selling the proprietary cryptocurrency.

Even with virtual currencies and digital asset ownership, video games got there first. Games have had sophisticated virtual economies that meaningfully intersect with IRL ones for decades. The in-game intrigue of Eve Online, released in 2003, once prompted a user to spend the equivalent of $30,000 on a virtual spaceship. That amount may sound dinky compared to today’s NFT prices, but bear in mind that Eve Online’s economy is also so intricate, so involved, that it employed its own economist to oversee the market. As far back as 2010, Entropia Universe users were collectively investing hundreds of thousands of dollars in virtual real estate in the form of space docks for ships and biodomes.

Remember this, then, when some sect of metaverse preachers says notions of “ownership” are lacking in games. A metaverse, they might argue, would be more “real” because business conducted in it would translate elsewhere. It could be very cool to own—really own—in-game outfits and items, through NFTs, they suggest. Bring my Keanu Reeves Fortnite skin over to World of Warcraft, for example, or use my favorite Valorant gun in Counter-Strike: Global Offensive. It’s a pretty picture; and even pushing aside copyright hurdles or the logistics surrounding competing game companies dismantling years’ worth of code to integrate brand-friendly cosmetics, there is one glaring issue: The target audience doesn’t seem into it. Ubisoft’s December decision to integrate NFTs into Ghost Recon Breakpoint and other games, in the form of artificially scarce in-game items, was met with mass skepticism, even derision. On top of the environmental impact of NFTs, many players said, it seemed like a shameless money-grab.

A month later, the president of Square Enix, Yosuke Matsuda, announced the company’s interest in NFTs, acknowledging potential backlash up front: “I realize that some people who ‘play to have fun,’ and who currently form the majority of players, have voiced their reservations toward these new trends, and understandably so,” he wrote. “However, I believe that there will be a certain number of people whose motivation is to ‘play to contribute.’”

Even if Matusuda is right and video games do start looking more like «metaverses,» and vice versa, it will still be a long time before even the most advanced virtual worlds reach any kind of Snow Crash-ian level of functionality or usefulness. For a metaverse to be truly interoperable, change-leading companies like Meta will have to work with other technology companies like Epic Games or Square Enix to stitch together their platforms and services. This seems unlikely, considering the past decades have shown tech companies are more inclined to consolidate than cooperate. It worked when big fish like Meta (then Facebook) were buying smaller ones like Oculus, but getting all the big fish into one happy pond seems doubtful—and would produce a whole new set of problems.

It’s also challenging to imagine a metaverse that can scale to accommodate anywhere near as many digital bodies as there are physical ones browsing the internet today. And part of why it’s unfathomable is because the games industry has already proven that server space is a limiting factor. Amazon, which owns Amazon Web Services, a backbone of the internet, also runs the MMORPG New World which, at launch, couldn’t accommodate the number of players attempting to log in. Final Fantasy XIV welcomed 94,540 concurrent players just over Steam one day in early December, all sharing space, dancing, singing, playing music, buying dresses, and of course fighting dragons; but to enter many of the game’s servers, there was a 5,000-person wait.

The things that make the promise of a metaverse intriguing, for the most part, already exist in online games. And much of what remains of that promise is unappealing, impossible, or greedy. That’s why, over the last year-plus of lockdown, not one existing virtual world has been in a position to capture corporate meetings and ecommerce. Online games, in the meantime, bloated to accommodate a baser and more prevalent desire: to be together and relate as people, not as workers or consumers.

Maybe it was the wrong time, just like Second Life was wrong for corporations in 2004. Maybe all we need are $300 Oculus Quest 2 headsets to feel like we are really there. Or, perhaps, fun and games were the best uses for cyberspace after all.