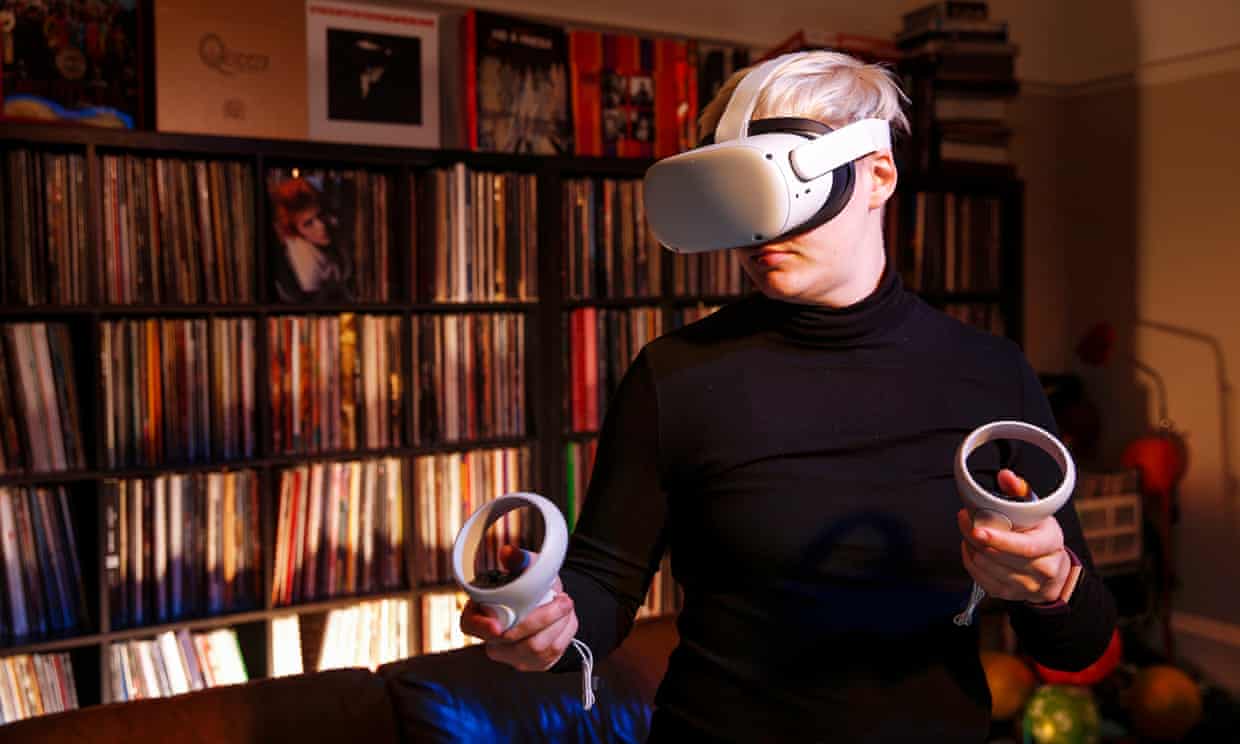 Until 2019, virtual reality was an absolute faff to use. It was expensive and tethered by cables to expensive PCs, but the wireless and easy-to-use Oculus Quest has changed that. Once the headset is on you can browse from a few hundred apps and games designed for VR, many of which are social spaces designed for chatting to other people. VRChat is one of several, and the most popular, partly because it is intriguingly wild and random.

Portals lead to different chatrooms – a club, a beach, apartments, galleries – all of which look like they’re straight out of a video game from 2009. This is not an aesthetically rich experience. In a miniature cyberpunk city, my eyes are assaulted by clashing neon and giant billboards advertising different spaces and communities, mostly adorned with smiling anime girls. In my latest trip into VRChat, a little green robot, a giant banana and a frog – other players – are wandering about aimlessly. The frog looks at me and gives a thumbs up. I exchange a few hellos with a Korean raccoon, before he walks off.

The point, in as much as there is one, is to find other people to chat with. And because a very large proportion of VRChat’s users are teenagers, people seem to be mostly interested in messing with each other. Trolling might be seen as a problem in virtual spaces by adults, but for teens it is rather the point, as evidenced by hundreds of YouTube video compilations.

“Edgy” humour is the norm here. The first thing anyone said to me in VRChat (a few years ago now) was: “Hey, do you want to do drugs?”, in a voice that had definitely not yet hit puberty.

It reminds me a little of Second Life, the online virtual world that briefly captured headlines in the early 00s, where I was once approached by a giant squirrel who offered to sell me a “bucket of Aids”. I did not encounter problems everywhere I went on VRChat – mostly just banalities and nonsense – but if I wanted to go looking, I would not have to go far to find someone spouting slurs for laughs, or one of the explicitly adult rooms.

Getting a conversation going at all can be a challenge. The truth is that most chats are random, fleeting and rather pointless, or mildly unpleasant. Right now, apps such as VRchat work on a kind of self-regulating report system when it comes to moderation: players who continually receive complaints about their behaviour gradually lose privileges, and you can mute or block other users if they’re annoying or harassing you.

Given how endemic toxicity is online, from Twitter to Facebook to Call of Duty, I do not have high confidence that Meta or indeed anyone in the big tech world has either the will or the means to make the online world universally pleasant and safe. In this way, VR worlds are no better or worse than anywhere else online.

Bearing in mind that like social media, VR headsets are not intended for users under 13, the best we can do at the moment is equip teens to deal with it.